All you have to do is leave your porch light on 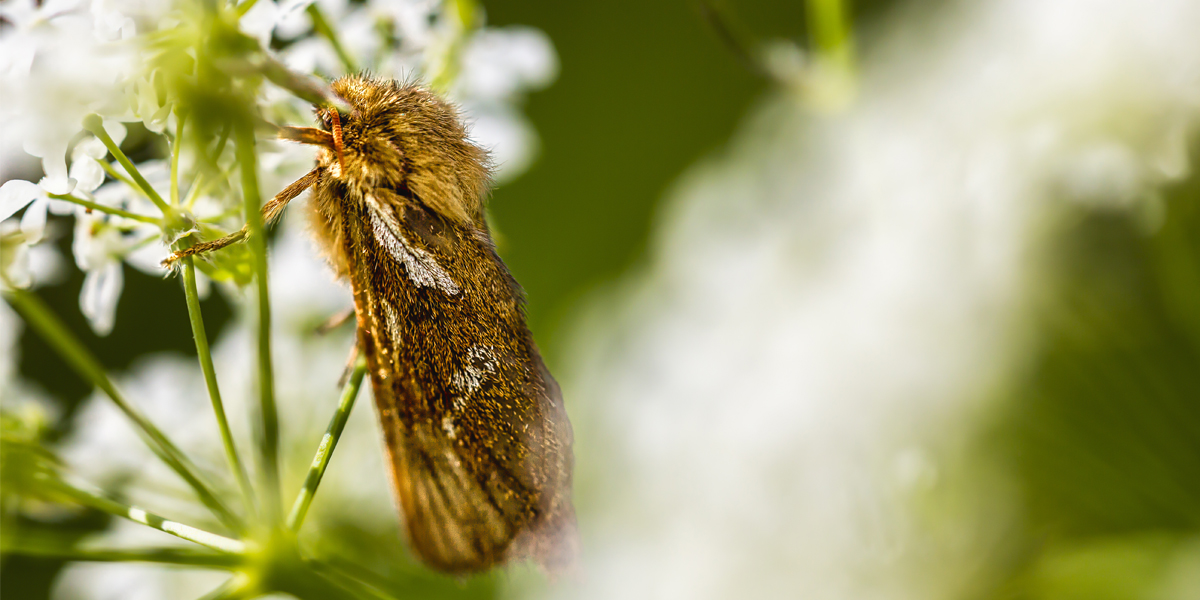 It’s night in the woods. Flashlight beams dart through the trees. Moonshiners? A cult? Neither. It’s Moth Night, and a bevy of moth seekers armed with flashlights, blacklights, mercury vapor lights, and white sheets are illuminating the wondrous, nocturnal Lepidoptera alighting among the trees. This scene has been witnessed annually in East Brunswick, New Jersey, since 2005. Thanks to local Moth Nights, sponsored by the Friends of the East Brunswick Environmental Commission, something else has taken flight: National Moth Week (NMW), a local effort with Rutgers roots that not only went national in 2011 but has become an international citizen science phenomenon inspiring thousands of public and private moth-watching and educational events in over 90 countries and all 50 U.S. states.

The founders of National Moth Week are David Moskowitz (GSNB ‘16), a naturalist who completed his doctoral degree in entomology at the School of Environmental and Biological Sciences (SEBS), and Liti Haramaty, a marine sciences researcher in the Department of Marine and Coastal Sciences. With additional support from Rutgers-affiliated people, this team transformed local Moth Nights into an international spotlight on moths.

A look at how it all started begins in Moskowitz’s own backyard in East Brunswick, but elements that led the team to take their local initiative to the big leagues goes back to both of their early days.

Moskowitz is a broadly trained ecologist and senior vice president for EcolSciences, Inc., and Haramaty’s career is in marine science; however, they each can point to a part of their lives that was devoted to insects. “My parents say from the moment I was born, I was interested in insects,” Moskowitz says. As an adult, he runs a blacklight in his backyard at night and brings the light in his carry-on luggage when traveling.

Haramaty discovered her passion for entomology during her undergraduate and graduate studies in biology and ecology, respectively—before turning to marine science—when she was working in the Negev desert in her native Israel on a survey of insects. The lab where she worked discovered Bacillus thuringiensis israelensis (Bti) as a biological mosquito control.

Fast forward to the early 2000s in New Jersey, when Moskowitz and Haramaty had implemented several successful community and citizen-science projects in East Brunswick, through the Friends of East Brunswick Environmental Commission, which they co-founded together. “I was running a blacklight and a moth light to attract the moths that I could find in my backyard for some time,” says Moskowitz, and after he gifted Haramaty a blacklight for her own backyard, “it morphed into wanting to share that with our local community.”

From their very first Moth Night in East Brunswick in 2005, attended by more than 100 people, the interest never subsided. “We were just blown away by the community interest in coming out at night and seeing moths and seeing what we were doing, and so we decided to run them regularly a couple times a year, always with just fantastic attendance by families and children—people would travel from other towns to come and see Moth Nights and it became such a positive event that we just continued it,” says Moskowitz.

“It’s usually a 5–6-hour event,” adds Haramaty. “Families with young kids come early. At the end of the evening, after midnight, you have only the real serious people staying—the people with good cameras and who know the names of all the different species.”

One night in the fall of 2011, the duo and their spouses (Haramaty’s husband is also a SEBS marine researcher) were sitting around ruminating about the success of Moth Nights when Haramaty and Moskowitz came up with the idea of getting people around New Jersey to simultaneously do a Moth Night. They immediately wondered why it had to just be New Jersey. “If we want to start looking for people, let’s do it in all 50 states,” Haramaty says. “Then I’m thinking, why do it in just the states? Let’s do it worldwide, because I’m thinking of my friends in Israel who may be interested in doing this.”

After reaching out to an existing Facebook group of “moth-ers” and getting an enthusiastic thumbs-up, the grassroots movement exploded. Like moths to a light, they attracted a throng of supporters and established a diverse and international support team made up of nature lovers and scientists alike. Their core group, however, reflects their local roots and naturally includes other Rutgers-affiliated people.

Rutgers people on their home team include Elena Tartaglia (GSNB’13), who received her doctoral degree in Ecology from Rutgers and is currently an assistant professor at Bergen Community College; and Sandra Lanman, president of Lanman Communications LLC and former director of media relations at Rutgers, who obtained her bachelor’s degree in English from Douglass College and master’s in communication and information studies from the School of Communication and Information at Rutgers.

On the international side, team member Belen Mena is an Ecuadorean graphic designer who designed the NMW logo featuring the brilliant yellow male Io (pronounced eye-oh) moth. The Io is not some exotic species found in a far-off endangered rain forest, but a moth common to much of the U.S. In a way, the Io became NMW’s symbol by virtue of showing up at that very first Moth Night in East Brunswick. “I had never seen them before,” Haramaty recalls. “They’re quite common but you never see them because they fly at night. And there were six of them. You have to fall in love with this insect when you see something like that.”

Judging from the popularity of local Moth Nights, it’s no wonder the leap to National Moth Week was so well received. “It didn’t build—it grew instantly,” Moskowitz explains. “It got covered by National Geographic, the New York Times, Star Ledger, India Times, and Jerusalem Post. We tapped into something that clearly people wanted to explore.”

“Thanks to technology, our team is really people from all over the world,” says Haramaty. “We now have country coordinators from Hong Kong, India, Slovakia, Costa Rica, Greece, Israel, Columbia, and more. It was international from the get-go.”

Haramaty and Moskowitz are passionate about enabling citizen scientists all over the world. They work with partner organizations such as iNaturalist for recording observations. There is also a Flickr group for NMW participants with well over 100,000 images posted thus far. “Part of the importance of the NMW project and my work in marine science is that we’re in a race to figure out the world because it’s already changing, or it’s already changed,” Haramaty says. “We have people all over the world, and they’re making observations. Moth and insect populations have declined and changed in distribution. There’s enough data that’s been collected over the 10 years, that if someone wants to do an analysis, they can find the information.”

While citizen science can document data on the natural world, that exposure also has a profound affect on participants. “We don’t know the environmental benefits of kids and families coming out and seeing these moths and being out at night—one night we had flying squirrels running up and down a tree,” Moskowitz says. “But we know that when they come out and see something like this, you just know that they’re taking something away. Whether they go into the field of entomology or environmental science, or they become a lawyer or a CPA or any other field, I think there is something they will carry for their whole life from coming out to a Moth Night and seeing this kind of biodiversity.”

And, it can be as easy as leaving your porch light on. “The nighttime is this special, mysterious time, but there’s a lot going on at night, ” says Moskowtiz. “There is such nocturnal biodiversity, but we don’t tap that as easily as we do during the day, it just takes a little more effort. But it is well worth it when you begin to see the beauty and diversity of moths.”

NMW’s significance and anniversary are now a part of Congressional Record. NJ Senator Bob Menendez acknowledges his home state’s role in the July 15 record, stating, “National Moth Week has brought people together from many different cultures and ethnicities for the purpose of observing and protecting an important natural resource and dispelling the negative conceptions some may have of moths. It proudly represents the best of the Garden State and its concern for the health of our environment and all of its inhabitants. It is my great honor to recognize the anniversary of National Moth Week and celebrate the vibrant research and scientific community in the State of New Jersey.”

Rutgers University is an equal access/equal opportunity institution. Individuals with disabilities are encouraged to direct suggestions, comments, or complaints concerning any accessibility issues with Rutgers web sites to: accessibility@rutgers.edu or complete the Report Accessibility Barrier or Provide Feedback Form.